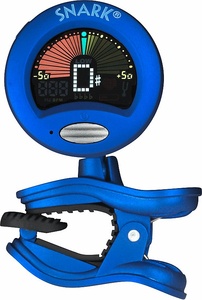 i often get asked by students what clip on tuners to purchase. Clip on tuners work either via a microphone that picks up the sound of the strings or it works by vibrations. So far I have tried two models, the snark (pictured above) and the D’addario NS micro headstock tuner. There are tons of other models, but here is my thoughts on these two.

The Snark: well like guitars, i was drawn to these because of the funky colours! So far I’ve had a red one and a blue one. I’ve had two because I’ve had issues with both. Firstly, these do look quite big when clipped onto the guitar. i wouldn’t want to use one for gigging as it is just very indiscrete. That said, for practice at home or rehearsals this doesn’t present a problem, and the fact it isn’t tiny means you can easily read the display. It is very intuitive to use, with red indicating flat, green in tune and yellow sharp. The problem with tuners like this is often leaving them on and then finding next time you want to use it the battery is dead! This one will automatically switch off after two minutes of hearing no notes.

Now to the issues that I encountered. This style of tuner has a weak point in its design; the join between the tuner and the clipping device. My first snark snapped at the lever linking these two parts whilst I was on a gig. It was pretty much useless after this. I tried sitting on the body of the guitar, but it was just awkward!  My second snark just stopped working. I tried fresh batteries and nothing, the display had given up on me. This is when I thought I’d try another brand.

The D’addario NS Micro tuner is tiny in comparison to the Snark. this wouldn’t suit everyone, but for me it was an ideal solution to discrete tuning at gigs. The tuner fits on the headstock of my guitar and is hidden away from all eyes but mine. 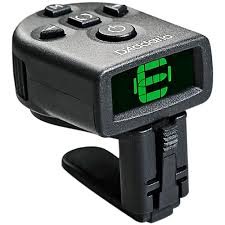 This means it stays on my guitar at all times and I think this is one reason why it still works. The snark was constantly being taken on and off and adapted to fit my guitars, which might have led to it breaking. One drawback of this tuner is if you leave it on, it won’t turn itself off for ten minutes. Whilst being small makes keeps it out of sight, the display is on the small side, but a sacrfice that is worth it to me.

Both get the intended job of tuning completed and are accurate. Overall I would recommend the D’addario. I’ve had it for 2 years or so now, which is pretty good for a clip on tuner!